On April 16, 2019, Dr. Richard Aslin, Distinguished Research Scientist at the Haskins Laboratories, presented his research on Learning and attention in infants: The importance of prediction in development.

I will review three lines of research from my lab that have implications for the normative course of development and for the diagnosis of deficits or delays in development among special populations. (1) Statistical learning is a rapid form of implicitly extracting information from the environment. It has been shown to be robustly present in infants, children, and adults. Children with Specific Language Impairment and adults with Autism Spectrum Disorder show different patterns of statistical learning. It may, therefore, serve as both a diagnostic tool and as a potential mechanism that underlies some developmental disorders. (2) The allocation of attention to gather information via statistical learning is controlled by both low-level stimulus salience and by predictive mechanisms. Infants allocate their attention to visual and auditory events so that they ignore both overly simple and overly complex information, while focusing mostly on information of medium complexity. Deviations from this normative pattern of allocating attention may contribute to some developmental disorders. (3) The infant brain must make predictions about upcoming stimuli. We have shown using a brain imaging technique called functional near-infrared spectroscopy (fNIRS) that an auditory cue can predict a visual stimulus, and even in the absence of the visual stimulus this prediction will elicit a brain response in the visual cortex. A follow-up study of prematurely born infants revealed that this brain signature of prediction is absent, despite these at-risk infants (tested at their corrected age) showing predictions at the behavioral level. 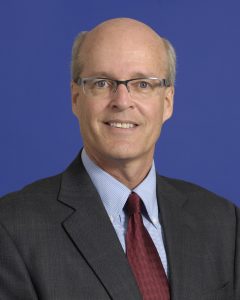 Dr. Richard Aslin is a Distinguished Research Scientist at the Haskins Laboratories in New Haven CT. Prior to joining Haskins in 2017 he was on the faculty at the University of Rochester for 33 years, where he established the Rochester BabyLab. Aslin has published widely in several sub-areas of infant development, including perceptual and motor systems, language acquisition, and statistical learning. His work on statistical learning with Jenny Saffran and Elissa Newport demonstrated the remarkable ability of infants to extract structure from rapid streams of speech by mere exposure. Subsequent work with Jozsef Fiser expanded the scope of statistical learning to the visual domain. And his work with Celeste Kidd and Steven Piantadosi documented that infants deploy their attention to auditory and visual sequences that have an intermediate (Goldilocks) level of complexity.

In the past decade, Aslin has focused on extending the statistical learning approach to grammatical category learning with Patricia Reeder and Elissa Newport, and on gathering neural measures of learning using fMRI, EEG, and fNIRS. With Lizz Karuza he has explored the neural correlates of statistical learning in both visual and auditory domains using fMRI. His fNIRS work with Lauren Emberson and Ben Zinszer has shown that the infant brain deploys predictive signals to encode expected events and that fNIRS has sufficient fidelity to “decode” stimulus conditions (e.g., word meanings) on a trial-by-trial basis. With Elika Bergelson he has shown that infants’ earliest words are organized on the basis of semantic relatedness.

Aslin has been the recipient of several major awards, including the APA Distinguished Scientific Contributions Award (2014) and the APS Mentor Award for Lifetime Achievement (2015), and several honors, including election to the American Academy of Arts and Sciences (2006) and the National Academy of Sciences (2013).